[Intro: Esoteric]
Yo
One-two
It's only right baby
7L
These cats are easy kills
It's dangerous, yo, check, yo

[Verse 1: Esoteric]
This type of cat live, like a psycho-hyperactive
Sociopath, throwing the math, yo my whole staff's
On attack, on the rap, check the warning track
Rap quarterback, leading the Patsies in the stack
When the tongue is the trigger, I squeeze first, like Jigga
I'm bigger than a.38, when I terminate
If I'm, fly by night, it's 'cause I, sleep 'til 6
Wake up, cop clothes, rock shows with top flows
I be, non-peace, beheading every beast
Weapons of the East, take it back, give your head a crease
Leave you dead at least, we roll deep with no beefs
On point like Mo Cheeks, my brethren hold heat
Leave you, with no teeth like, Kermit the Frog
Murder your squad, with the fear of God, herbin' you frauds
You rap Liberaces, make me sicker than the Nazis
Esoteric is the name, motherfucker, watch me

[Verse 2: Esoteric]
I spit verses, perfect for burnin' your back curvature
Certain it converted good person into a murderer
Live in Hell's Kitchen and shitting upon the furniture
Sermons that I spit are forbidden, where's the interpreter?
Tell society, I attacked 'em [?]
Like a sabretooth, breakin loose, like [?] in many
My buck-fifty's worth every penny
My team'll put this gun and spleen in the Gulf Stream
The engineer said I'd better relax
'Fore I kill you in the booth and leave you dead in your tracks
Put your head in the cracks, my agenda's
Taking out fake Five-percenters like federal tax
Yo I hack phlegm, and grab the mic by its stem
To publicly humiliate you like a bad friend
Everywhere we go it's like, "Yo, that's them"
The mad men balling out like the Pac-10
My ideology embodies thoughts at high velocities
My life is quite an odyssey
End careers with the pen, but never write apologies
Trite psychologically
War, I declare it, Al-Jazeera wouldn't air it

[Verse 3: Esoteric]
Yo, I'm cracking open domes, leaving broken bones, overgrown
With the vocal tone, rap Moses Malone
I'm detaching my own skull so I can soak it in chrome
Then come back like I'm Destro's clone to take my throne
I'm well known, lyrically my skill is well shown
I'm deadly, and epidemically I'm full blown
To infect it, injected, you're lookin' at the face of murder
Erasing words that have you lookin' like your Mason Verger
Your name's unheard of, I'll break you like need to break a [?]
Pussy, I'm like a Willie Mays rookie
While you're a '93 Jody Reed, so slow your speed
Got motherfuckers fighting over weed
I cut up guys like butterfly knives
Should've died last, rhyme-wise I'm Jesus times five
Quick to finalize my plans for your demise
Analyze this, you pitch I hit a line drive 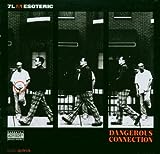