[Chorus:]
I wrote my new song on a five dollar bill
But I won't be able to sing it until
I get hot on the trail for to pick up the track
Of the dirty little thief and get my five bucks back

They wouldn't stop talking about Canadian rye
Bouquet and the palate and it's crisp and it's dry
In a Seagrams bottle, tasted mighty top shelf
I said "well, thank you very much, sir, I cooked it myself"

Of course, that didn't wash with the boys down south
Judging by the stream of color coming out of their mouth
Though I can't figure why, cuz from where I stood
It got 'em just as damn drunk as any store bought would

Well, he come stormin' cross the border with six or eight guys
Some damn fool saw fit to deputize
But there weren't no sheriff nor a marshall in sight
I guess the lawman was up drinkin' whiskey all night

He said gimme all your money but I got to his first
And I took his Colts too and the whole third verse
But he picked my back pocket; worked the five bucks loose
I had tucked in behind a can a Copenhagen snoose 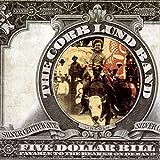