He's haunted by the memory of a lost paradise
In his youth or a dream, he can't be precise
He's chained forever to a world that's departed
It's not enough, it's not enough

One world, one soul
Time pass, the river rolls 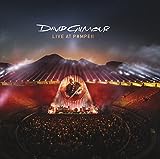