Outside my window
Not long before sleep arrives
They come with their sirens
And they sweep away all the boys
Busy draining the joy from their lives
They never said their prayers out loud
And while I'm dreaming
There's a passing motor car
That broadcasts a popular song
And a girl appears to be saying
"Do you think that I'm going to go far?"

[Chorus 1:]
Just look at me
I'm having the time of my life
Or something quite like it
When I'm walking out and about
In London's brilliant parade

From the gates of St. Mary's, there were horses in Olympia
And a trolley bus in Fulham Broadway
The lions and the tigers in Regents Park
Couldn't pay their way
And now they're not the only ones

At the Hammersmith Palais
In Kensington and Camden Town
There's a part that I used to play;
The lovely Diorama is really part of the drama, I'd say 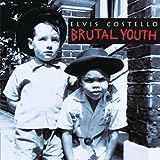