While Henry Hamilton-Smythe minor (8) was playing croquet
with Cynthia Jane De Blaise-William (9), sweet-smiling Cynthia
raised her mallet high and gracefully removed Henry's head.
Two weeks later, in Henry's nursery, she discovered his treasured
musical box. Eagerly she opened it and as "Old King Cole"
began to play, a small spirit- figure appeared. Henry had returned -
but not for long, for as he stood in the room his
body began ageing rapidly, leaving a child's mind inside. A lifetime's desires
surged through him. Unfortunately the attempt
to persuade Cynthia Jane to fulfill his romantic desire led his nurse to the nursery
to investigate the noise. Instinctively Nanny hurled
the musical box at the bearded child, destroying both.

Play me Old King Cole
That I may join with you,
All your hearts now seem so far from me
It hardly seems to matter now.

And the nurse will tell you lies
Of a kingdom beyond the skies.
But I am lost within this half-world,
It hardly seems to matter now.

But the clock, tick-tock,
On the mantlepiece -
And I want, and I feel, and I know, and I touch,
Her warmth... 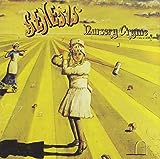