Yes it's back on the road again
I just got me some new-found friends
And it's alright, yeah it's alright.

Flew away at the speed of sound
I threw up when we touched down
But I'm alright, I'll be alright.

New York's bakin' in the sun
Got the news it just made number one
Here we go for one more memory
Way back here in the twentieth century.

That night in Amsterdam
You saw me for what I am
And you found out, yeah you found me out.

And I knew what I saw in you
And I still can't believe it's true
But I'll find out, I'm gonna find out.

Meanwhile back down on Fifth Avenue
Raphael just bought some brand new shoes
Me, I'm wiped out, I'm dead on my feet
Come a long long way from Baker Street.

I'm watchin' a night come down
And we're headin' for one more town
But it's alright, yeah it's alright.

Who cares what the night might bring
Cause we're ready for anything
So it's alright, yeah it's alright.

Heading' out across the U.S.A.
California's still a long long way
Here we go for one more memory
Way back here in the twentieth century. 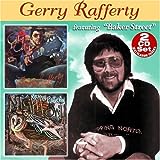