"What is life? An illusion, a shadow, a story.
And the greatest good is little enough,
For all life is a dream
And dreams themselves are only dreams..."

"We have all some experience of a feeling,
That comes over us occasionally,
Of what we are saying and doing
Having been said and done before, in a remote time -
Of our having been surrounded, dim ages ago,
By the same faces, objects, and circumstances -
Of our knowing perfectly what will be said next,
As if we suddenly remember it!"

"There is a drowsy state, between sleeping and waking,
When you dream more in five minutes
With your eyes half open, and yourself half conscious
Of everything that is passing around you
Than you would in five nights with your eyes fast closed,
And your senses wrapt in perfect unconsciousness."

"Dreams are real as long as they last. Can we say more of life?"

Faces become strangely familiar
Stumbling upon traces of my visions

Now I see a shadow of a man
In my silhouette he stands
The wisdom of my premonition comes to life!
I was just a kid back then but now I'm back to take revenge
I sternly look my killer in the eye

Will this ever end?
I've been through enough
This is the part where I wake up with blood on my hands
Traveling back to where it all began

As for the boy, it pleased me to know
That he'll just wake up nine years old, alone and afraid
He'll live for the day this moment comes around again

From the beginning I never dreamt I was the killer

Over the edge, falling in and out of time 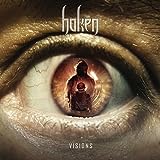