Yeah, she's built for speed like a back Castrum doloris
Good for the needy like Nietzsche, Freud and Horus
But I'm skin flint broke making no money making jokes
But baby, I won't joke with you

My feet are burning like a Roman hypocaust
But the Romans are gone, they changed their name because they lost
She writes letters like a Jack Chick comic
Just a bunch of propaganda make my fingers histrionic

I mean, she's my baby but she makes me get avuncular
And when my monkey is jumpin' I got no time to make it up to her
Uh, I fantasize about the hospital
The army, asylum, confinement in prison
Any place where there's a cot to clear my vision

Don't you want to lose the part of the brain that has opinions?
To not even know what you are doing?
Or care about yourself
Or your species in the billions? 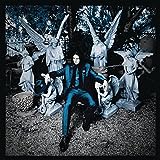