She said, "It's none of my business but it breaks my heart."
Dropped a dozen cheap roses in my shopping cart
Made it out to the truck without breaking down
Everybody knows you in a speed trap town

Well, it's a Thursday night but there's a high school game
Sneak a bottle up the bleachers and forget my name
These 5A bastards run a shallow cross
It's a boy's last dream and a man's first loss

And it never did occur to me to leave till tonight
And there's no one left to ask if I'm alright
I'll sleep until I'm straight enough to drive, then decide
If there's anything that can't be left behind

The doctor said daddy wouldn't make it a year
But the holidays are over and he's still here
How long can they keep you in the ICU?
Veins through the skin like a faded tattoo

But it never did occur to me to leave till tonight
When I realized he'll never be alright
Sign my name and say my last goodbye, then decide
That there's nothing here that can't be left behind 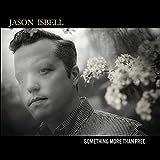