JOHN FOGERTY
"I Saw It On TV"

They sent us home to watch the show comin' on the little screen;
A man named Ike was in the White House, big black limousine;
There were many shows to follow, from 'Hooter' to 'Doodyville',
Though I saw them all, I can't recall which cartoon was real.

The coon-skin caps, Yankee bats, the "Hound Dog" man's big start;
The A-Bomb fears, Annette had ears, I lusted in my heart.
A young man from Boston set sail the new frontier,
And we watched the Dream dead-end in Dallas,
They buried innocence that year.

We gathered round to hear the sound comin' on the little screen,
The grief had passed, the old men laughed, and all the girls screamed
'Cause four guys from England took us all by the hand,
It was time to laugh, time to sing, time to join the band.

But all too soon, we hit the moon, and covered up the sky;
They built their bombs, and aimed their guns, and still I don't know why
The dominoes tumbled and big business roared;
Every night at six, they showed the pictures and counted up the score.

The old man rocks among his dreams, a prisoner of the porch;
"The light," he says "At the end of the tunnel,
Was nothin' but a burglar's torch."
And them that was caught in the Cover are all rich and free,
But they chained my mind to an endless tomb
When they took my only son from me. 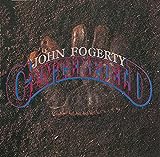 JOHN FOGERTY videos - I Saw It On TV