No bed for Beatle John!
Beatle John Lennon lost his hospital bed yesterday to a patient.
It happened at Queen Charlotte's Hospital, London,
Where John was keeping vigil in the room
Where his girlfriend, Yoko Ono,
Is being kept under observation.

When he realized his bed was needed for an urgent case
John sent out for a sleeping bag.
And last night
He was once more happily kicked out alongside Yoko
In the sleeping bag.

Yoko who expects her baby next February
Will remain in the hospital for another few days.
A Beatles spokesman said
There is a good chance for the baby's survival.

The Beatles win battle of the nude LP!
The Beatles have won their fight to put out an LP record
With a sleeve showing John Lennon and Yoko Ono in the nude!

EMI, the world's biggest recording company,
Whose artists includes the Beatles,
Refused to handle the LP called 'Two Virgins'
Because of the sleeve.
So did the group's American outlet, Capitol Records.

But the record with its controversial sleeve
Will be released in both countries next month.
An official of The Beatles Apple company said last night
The sleeve has not been censored or altered in any way.

We are pleased it is being distributed
But it may be that some record shops
Will still refuse to handle it. 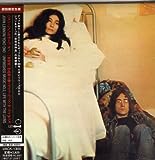