[Verse 1: ILL Bill]
Glowing Grim Reaper eyes, bleeding skies, demons rise
Half the youth believe in lies how crucifying Jesus died
Walk amongst the snake charmers and bank robbers
That spray Llama, slay drama, I hate problems
We the most precious resource with treachery cause
Destiny calls when every king eventually falls
Scientifical THC density warped
Future primitive savage remove the head from your corpse
Throw your aura in a black glow energy warp
Biotech cyborgs without a shred of remorse
Another mutated life force of the deadliest sort
My shooter's a strike force, remove your heads with a sword
Better yet a saw, get a straw, medicine galore
On that goon shit, we be the most relevant of all
Brand you can bet your hand on
These other brands are tampons
With sand sores, but fuck that bullshit 'cause ours bang hard

[Hook: Nems]
Now everybody saying Coka is back
But they ain't go nowhere, they was rolling the stacks
Standing over the body, watching smoke from the gat
We the illest in the game and you know it's a fact
BRRAATT!
Bong bong, motherfucker
Hit your bitch raw dog hard, motherfucker
Push your shit back, you LeBron, motherfucker
Haha, let's get on, motherfucker

[Verse 2: Nems]
Knocked 'em out with one punch that's a shitty fight
Getting money, fucking gunthers, that's the shitty life
I'm in your city, hype, fucking big titty dykes
These fucking bars will knock a hipster off a city bike
Fuck your life nigga, we so damn glorious
Coney Island hundred deep, no it ain't The Warriors
It's the Lyfer Gang, nigga get your wifey banged
It's pure dope, put in in the needle, spike your vein
I hit the booth grilling tracks with my true feelings
Then I hit the stage a capella they like, "Ooh kill 'em!"
I'm in the coop chilling, rag top, new ceiling
Bumping George Michael, cross dangling off my hoop earring
Eighties shit, get your lady hit with the crazy dick
Big guns like they on the deck of a Navy ship
You leave the crib, I'm smoking weed with your babysit'
Hit her raw, then wipe my nut on the baby bib

[Verse 3: Slaine]
From the basketball diary, Catholic team junkie
Cocaine kid on the path that seemed bumpy
Half the team locked in a casket seen monthly
Travelling in packs like a Capuchin monkey
Sack of trees chunky, my faculties funky
Rackets and packets get me out the lead jumpy
But I ain't had no vertical leap
Just this phantom that I can spin into this vertical deep
Now the wrath on that path has a past between us
We killed your radio and smashed your zenith
The federales, yeah they had subpoenas
Drones and satellite dishes lined half to Venus
But they can suck my flaccid penis
Once the kid's off the grid, while I got enough cash to lean us
Serial scratched off when we stash the niners
Live to shoot another day and make a classic remix 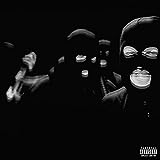