[Intro: Slaine]
For all the Charlestown bank robbers...
This one's for you!

[Verse 1: Slaine]
Let's smoke a bundle of embalming fluid
Stick an armored car up, I'm a climb into it
All I need is an eight-ball and nine to do it
I'll put the fucking driver in the trauma unit or
I know some wannabes, sloppy with keys
With coke and cash in the crib, probably trees
We'll get em drunk, passed out, and copy his keys
Open his door, rope up his whore and then breeze
I know the time for a robbery
Is very long but it really doesn't bother me
I need to get rich, bitch 'cause I'm drug sick
I got a mask, gloves, gun and a thug clique
Fuck a pig cop, faggot or a mug flick
We get away clean, we'll never be seen
And this is the American dream
So we fight for it, kill for it, whatever it means

[Verse 2: Everlast]
It's the iron man with the nine in his hand
Got my mind on my plan 'cause I grind for the fam
Kick in the door waving the four-four
Run the kush and the cash, get your ass on the floor
Ties his hands around his back with extension cords
He was slipping backstage at the Source Awards
I call DMS, you call EMS, FDNY, NYPD
We get high committing strong-armed robberies
Don't matter if it's crack, heroin or trees
When the gun's in your face, you gonna open the safe
Unless you really wanna know how a bullet'll taste

[Verse 3: ILL Bill]
I pull hammers like double aces
My Desert Eagle's in your fucking faces
It's Billy Crystal, the fucking greatest
A really cool guy, run up on you, shoot nine
A fucking idiot, I ain't afraid to do time
Addicted to money, I ain't afraid to do crime
Addicted to pussy, X-rated with two dimes
I fall asleep at night clutching the biscuit
Hiding the kilo of cocaine in a bucket of chicken
Listen, we big earners with big burners, a bunch of murderers
Fuck a heater, I'll beat you to death with furniture
Throw chairs and tables, kitchen sinks, listen bitch
We the shit, motherfucker this is it
We the real thing, we bring Scorsese to reality
I turn horrifying behavior into salaries
I jump out a helicopter and pop you
Run up on you while you're in Burger King eating a Whopper 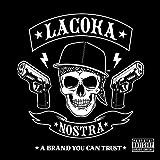