LORETTA LYNN
"Story Of My Life"

Doo got me a guitar
I wrote me a song
Moved to Nashville, it wasn't long
'Till I was on the Grand Ole Opry

We bought us a mansion on a hill
Livin big like we were big deals
Scarlett O'Hara in Gone With the Wind
I was pregnant again
Oh gee, oh Lord, I swear
The babies are comin' in pars

No me and Doo, married forty-eight years
Six kids later a lot of laughter and tears
I have to say that I've been blessed
Not bad for this ol' Kentucky girl I guess
Well, here's the story of y life
Listen and I'll tell it twice 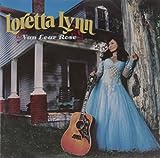