LOU REED
"Growing Up In Public"

Some people are into the power of power
The absolute corrupting power, that makes great men insane
While some people find their refreshment in action
The manipulation, encroachment and destruction of their inferiors

Some people are into sadistic pleasures
They whet their desires and drool in your ears
They're quasi-effeminate characters in love with oral gratification
They edify your integrities, so they can play on your fears 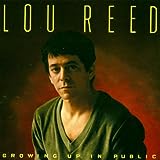