Looks like I wrote this song on paper
First time I did that in like 3 years...
My handwriting is horrible and I can barely read this

[Verse 1: mac miller:]
Hey, hey, don't even know what's in my head anymore tho
Uh, figured out I ain't gonna go to college, lee corso
Fuckin' girls but I never kept the door closed
Want you all to hear the way I put it in her torso
I ain't normal, I'm clinically insane
I guess it's the result of drugs that enterin' my brain
All of a sudden, every legend keep on mentionin' my name
All that does is show me that my life will never be the same
Police tryna to figure out how to get me locked up
I tell those cops suck dog nuts
Arriving to the party in a chariot
Lookin' for a scary bitch that I can pop her cherry pit
I'm very sick, yes very ill
Eternal sunshine, jim carey feel
At the amusement park scared of heights: ferris wheel
Double dare me to kill?

Got some soul like de la do, they say I'm new
It's nothing but some deja-vu
Everywhere you go these people hate on you
Deja-vu, deja-vu

[Verse 2: mac miller:]
Wind chimes, sick rhymes, been high on this incline
Tryna get my money stackin' tall, 6'9
Have some caviar, sip wine
Sacrifice insanity, sacrifice normal
Purpose is for people in the plural
Form never formal, an art form, not a mural
Work 4 bars that are tighter than your corn rows
See a girl that's lookin' horny in the 4th row
Ha, I just put it in her mouth, ortho-
Dontist, manipulating phonics, put 'em into sonnets
Let me put you on this nastier than nas is
Bubonic plague, bacteria that's tryna to find a way
Spread, like yolk from a broken egg
Talkin' shit? you just diggin' your grave

Got some soul like de la do, they say I'm new
It's nothing but some deja-vu
Everywhere you go these people hate on you
Deja-vu, deja-vu

[Verse 3: mac miller:]
Hypothetically I'm dope, I kick incredibly
Potentially could be the remedy for happiness without the ecstasy
No methamphetamines, hot, 110 degrees
Visually stunnin', you gotta see it on the led
When I was 17 I thought I had it figured out
Now I see what it's about, went in down a different route
It's crucial, 3 new schools, life with a spoonful
Of sugar, yeah I need my medicine
Fuckin' mary poppins, gotta treat her like the president
Represent all these fuckin' people that I never met
Some expect me to be the greatest ever
Hear me on the radio, shit'll change forever
Now I'm just a pop sensation, fuck your expectations
I'mma be the best, have some patience
Thought that it was great, then poof!
It was nothing but some deja vu'Schuingedrukte tekst' 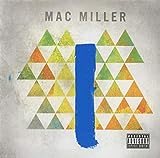 MAC MILLER videos - Of The Soul