[Verse 1: Killah Priest]
Death come to those who oppose
Knockin' at the door, holding a rose
In plain clothes, when the face ice cold
Lock your windows, still I come in when the wind blows
Come in slow, suddenly your eyes close
Then your body set through your soul, it rose
Turn into a black crow and fly into the internal night
That's when I also take flight
I turn into a great falcon
With mighty wings, when they flap, they move mountains
I leap on your back, like a wild fucking monkey
Eyes are blood shot red, with a growling tummy
Beat your fucking back out, like a gorilla
When I was tore, I figure my way, out the house of mirrors
I show up to a recording session, with no facial expression
I'm just there like I crept in
Escape through the east gate, return through the west ends
When the son said, I'm like the westerns beneath the moon light
And the crescent, Priest, I have a stance, that's strong
When I perform, I transform, into a sandstorm
Leaving one third of the land torn
I'm like mice, I react strange
I'm like a terratrane, I react crazy when the weather change
Then the father of a hurricane, handcuff pain
I whip tornados with iron chains
I make volcanos scream out my name
Niggas kill me, try'nna escape my wrath
Through death, don't you know, I'm crazy muthafucka, I hold my breath..

[Verse 2: Method Man]
We walking dogs, foot soldiers, fuck you all
Guns and roses, play the wall
The final curtain calls every day, all day
We hurtin' ya'll, project hallways is triflin'
Public Enemy, number one, still fightin'
The power, like Tyson
When nothing else work, start biting
Swallow up that weak shit, they writing
Spit it out, frustrated with the line
Hard for me to get it out
Intellectual, architect, bomb threat to a vegetable
Mr. Meth, you can get the left and right testicle
Step to the rear, Wu-Tang on arrival
Raised in the ghetto, singin' songs for survival
Nothing else matter, suspect chin niggas shatter
Clap a mad rapper, red dot beemin' on the blood clot, splatter
University, anniversary of terror
It's now, or it's never
Ain't no in betweens in the cold war
Can't hold it down, got a thousand that can hold yours
Starvin', pardon me, God, I get a charge
Like a human lighting rod, strike back with no regard
For the innocent, harder than the bricks in my tenements
Wu-Tang, forever and a day, we be killin' it

[Verse 3: Masta Killa]
So patient, they sat there in the aisles and waited
For the testimony, hungry, for a statement from the one and only
Thirsty for the ceremony at and, true Wu die hard fans
Now look how we rock, make a freestyle drop, old school like the wop
My grandaddy used to do this dance called the slop
I keep it hip hop for ya'll, we don't stop
Got ladies by the flock, no safety on the Glock
Stop, look and listen when the semi auto's pop, your neck
Mock with the rope, who can match palm
I'm strong as a nuclear bomb, dangerous armed
Have you not prepared yourself, you've been warned
Gun shot to the informer, Killa Bee Swarm
Caught 'em on the corner of Lavonia
Reported missing, found him in the fetal position
Shot twice, armed with the rocket
Blind for the target, deaded on arrival
Suspenseful, kill or be killed, pass the rifle 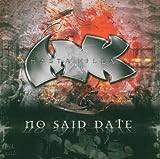