Busted, caught red-handed again
You can't be trusted, born to lose, you'll never win
You're so corrupted, you stand before us condemned
So maladjusted to the world we're living and dying in

Spy versus spy, you will never have friends
You deny, the truth of where you've never been
You get caught, and then the "blame game" begins

A couple drinks and then you'll feel ok
A couple pills makes the world go away
What the hell, you'll die anyway and say...

I'm a disease, and I'm addicted to myself, ha!
I'm all I need, I'm gonna live and die in hell

No fingerprints, you erased you exist
Kill or be killed, how you get your kicks
Over, and over, you just couldn't resist

Only a fool would do what you've done
You lie, you steal, and you cheat everyone
When your caught in your most despicable deed
You plead the caught for diplomatic immunity

You may be eloquent with your savoir fare
But each time the smoke clears, another bodys there
You've had more than your share of good advice
There's nothing left to say, now except "have a life"

Their faces haunt your dreams, each, and every night
When it gets too much, in your ring there's cyanide
Now everything fades out and you depart just like a ghost
The devil says "Welcome to hell, I will be your host"

Your existence and this twisted game
The definition of criminally insane
It won't be long until you do it again, you'll see!

I'm a disease, life in hell
I'm all I need, die in hell 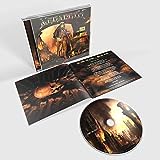