[Verse 1: Eminem]
Well, I do pop pills
I keep my tube socks filled
And pop the same shit that got 2Pac killed
Spit game to these hoes
Like a soap opera episode
And punch a bitch in the nose 'til her whole face explodes
There's three things I hate
Girls, women, and bitches
I'm that vicious to walk up and drop-kick midgets
They call me Boogie Night
The stalker that walks awkward
Stick figure with a dick bigger than Mark Wahlberg
Coming through the airport
Sluggish, walking on crutches
Hit a fucking [pregnant] bitch in her [stomach] with luggage
It's like a dream I can't snap out
I black out, I'm back out
I'm lookin for something of to beat the crap out
I'm bringing you rap singers two middle fingers
I flip you off in French
Then translate in English
Then I'mma vanish off the face of the planet and come back
Speaking so much Spanish, Pun can't even understand it

[Verse 2: Eminem]
I had a huge attitude, started off staticky
Mad at you, had you mad at me automatically
I'm not a commodity, I'm an oddity
Who oddly enough developed himself a Halloween following
It's so big, if I counted up all the freaks who follow me
I'd probably owe Ozzy Osbourne an apology
College girls, live in an alcoholic's world
Full of url, head twirls every time the toilet swirls
Covered in throw-up, and I refuse to grow up
I won't budge, I still tell a grown-up to shut up
I made this rap game suspenseful, 'cause now I got an impulse
Gave to insult you with a pencil (Bitch)
And waste the paper on you
Chopping down the oakwood
'Cause everything that you wrote in your notebook was no good
And as long as I stay in the studio and keep cuttin'
You motherfuckers are puttin' your words together for nothin'

[Verse 3: Eminem]
I'm homicidal and suicidal with no friends
Holding a gun with no handle, just a barrel at both ends
Spraying tecs at you until you see your fucking legs
With the bullet holes and the exit wounds laying next to you
Fucking mad dog, foaming at the mouth
Fuck mouth, my whole house is foaming at the couch
Jumped out of the 93rd floor of a building
And shot every window out on the way down to the ground
(Keep filming)
Woke up to a hospital staff, got up and laughed, chopped 'em in half
Suffocated the oxygen mask
Shit, if I get any higher
I'mma get the East and West beefing again
Slide back to Detroit and stand in the crossfire

[Verse 4: Missy Elliott]
Y'all better call the police 'fore I kill this track
Don't shoot Missy, get back
I'mma put you all in the line and I'mma watch you MC's die
Yo Mommy, Mommy, Missy done lost her mind
I think somebody done pissed her off this time
I'mma have to bust you through your chest and
You gonna have to clean up the mess
It's raining, raining and it's pouring loud
Never fear, 'cause pissy Missy's through the crowd
I hear the gats go cha-pow
Who shot me dammit, bitch get down
Don't walk when I talk, I never talk when I smile
Lay em on down, like they lived underground
For the sound that me and Timbaland, we found
Get your ass kicked later or get your ass kicked now 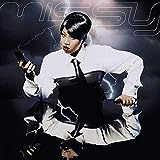