Now number two, practiced the snake style
He was known as the snake spirit
He had the speed of a snake

[Intro: Killah Priest]
Niggas is like serpents out there
[Snake style, no one could compete]
Serpents will bite
Lay outside, and then they roll back into they holes
They slither, in the streets of Brooklyn, New York
Slither in the streets, of Manhattan
In the streets of Queens, streets of the Bronx
Streets of Staten Island
Wherever you see em they slither
Whoever... yo
Fearsome shit... check it out
Yo, yo

[Verse 1: Killah Priest]
It broke me up when they pat me on my shoulder
Said stay strong 'cause his life is now over
I flash back to the heathens that he roll with
They shot him up and down nobody knows shit
My peers, little ears
Came up to me with a eye full of tears
Last night we was shootin' dice and gettin' nice
Kid rolled us, played us for our merchandise
We were in the hallway all day
Me, Steve and Little Ray
Probably at first they tried to rob me
Back me in the lobby, pull out the shotty
Then came Scotty, fragile body
My first impression, he returned from a party
He would just stagger, smellin' like Bacardi
The Dragon, braggin', how he was fuckin' mad hotties
Pressed on the elevator button, then all of a sudden
He licked off, about a dozen
Slugs from the cannon, that ripped through my cousin
Nobody was standing when the nigga started bustin'
Blood started to flood the floors by the elevator doors
That's the last thing that I saw
Damn, we planned to make grands and buy a home

[Verse 2: RZA]
Jagged edge, rockin' God, hard as Stonehenge
Pledged whoever crossed his path get scrapped with a sledge..
..hammer, he didn't give a damn about the manner
And on the block he was called by the momma's
And the grandma's, 'indecent', 'heathen', 'juvenile delinquent'
His weekends was frequently locked inside the precinct
His most recent cape for catchin' papes
Was snatchin' up snakes on a roof butt-naked hang em off like drapes
Then ask what's the combination to the safe, with the brace
And those who didn't reply they fell straight to their face
Razor blade sharp who invades the dark
And raid more spots than Spays and NARCS iron heart like Tony Starks
A fierce lion, who never leave the crib without the iron
And on the block he be slingin' rocks and duckin' from the sirens
Greetin' niggas he loved with a pound, and a bear hug
Those who wanted life, they catch a slug from the snub
A Five Percent, who all knew was one to ten
He loved the Gods with his heart but his brain was filled with sin
And when he came through niggas be lookin' out
Hopin' he gets shot or tooken out, or locked the fuck up in Brooklyn House
In PC, on a liquid diet, but he was louder than a riot
[Number two, the snake]

[Verse 3: Masta Killa]
Do the knowledge to a nigga named Trigga
Bad rude boy from the land of Jamaica
With visions to venture, to the U.S
To receive the gold that he couldn't achieve
In his country, even though he sold mad weed
For the next man, who was the Don of the clan
Niggas actin like they got the block locked
Like I can't sling drug raps and eat food
But I be the rudest, bad boy steppin gun totin
Shots lash out like a violent explosion
At the nigga, who tries to stop my production
Intervene the scene and slow up the cream
None of that black, East New York, gun talk
Niggas I extort from Baltic to Boardwalk
Memories of injuries wounds and burns
Walkin' through the streets of Medina I stand firm
'Cause I know this, which means I can hold mine down
Without a doubt, niggas who front, get snuffed out
Justice must be born there's no escape
'Cause a snake can't be reformed so why wait
Comin' in the name to proclaim your fame for protection
And you don't know no fuckin' lessons?
[Number two, the snake]

[Verse 4: Ol' Dirty Bastard]
Bad, bad, Leroy Brown
Baddest man in the whole damn town
Badder than the deep blue seaaaaa
Badder than you and meeeeee
Niggas comin thru the trees, like a salamander, bitin'
Like a piranha, but I'm bitin' you back, like a black pantha
The style I'm ampin' the... fuck my name, who I be?
Fuck the game, it's all about the moneyyyy!
Owahhaerahh, sometimes I get high with the Meth
Then I turn to the Killah Priest
When it comes TWELVE O'CLOCK!!
I turn into the demon beast, yo
Yo fuck that shit!
[Number two, the snake]
YO! SHOW THESE MOTHERFUCKERS WHAT TIME IT IS
[Number two, the snake] Rawwrarrrah
Rahhwarwaahauh, rawwaroar!!
WHO's THE BAD-ASS? *rawharrah*
WHO's THE BAD-ASS?
[Now number two] Rawwwaahrah
[He practiced the snake style
He was known as the snake spirit] YEAHhhhhh

[Verse 5: Buddah Monk]
Lyrics, never waitin, twelve days, penetrated
When I come with the ruffness, mad niggas try to rush this
Slip into my killings, then I slays and you're helpless
When I try to stay sick, it's Yakub grafted six
Calm for the kill, knowing the style that's ill
When I drop, lyric skills, brothers say, Buddah chill!!

[Outro: Ol' Dirty Bastard]
I don't need to rhyme no more, niggas know, yo!
To all the Wu-Tang Clan members
The Ghostface Killer, the GZA, the RZA, the Ol' Dirty Bastard
The Method Man, the Chef - Raekwon, Inspector Deck, U-God
Yo!!! 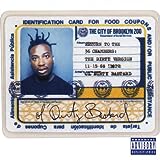