[Verse 1: C.L. Smooth]
I hear it callin' never stallin' hit the skinz bed or shelter
Love to tap her on the shoulder, roll her over, then I belt her
Leave a bite when the joint is tight, lovely when it's loose
Produce the proper juice, plus I never hump a deuce
Give me the head on the waterbed, play you like a Pro Ked
Slide the flavors on the sled, listen to what he said
Come and lie on the bearskin, notice how the firm make him grin
Cover the checks and then I go cash em in
Hold the zipper, unlock, and grab the whole bag of treats
Hear the hooker slam the butcher with the biggest stack of meats
Take two hands to hold it, flip it out and unroll it
If you spot a brother larger then the next man stole it
Oochie coo now, you know the Mecca wanna bang bang
Beggin' a pardon as I knock a new skinz stank thing
CL, kickin' flavor with the Grand Puba
Speakin' on the wins, I'm about to hit the skinz

[Verse 2: Grand Puba]
Nowadays I'm on some extra be careful (shit)
I take precaution, before I slide up in the slit
Man (fuck) that I put aluminum foil on my (dick)
'Cause if you catch it, boy that (shit)'ll kill you quick
Better yet, you can pass me a Ziploc
A bag of boom, and a 40 then some boot knock
I get stiff and it's hard like Charles Bronson
It's kinda (fucked) up what happened to Magic Johnson
But anyway, you know the resume
Time to drop the Girbauds and parlay, HEY
I rock the world of a big batty girl
Won't hit the skinz if she gotta jheri curl
'Cause when I jump into my thing I make the bed spring sing
And you can ask my old fling, who's the bedroom king?
Hit the skinz hard, she'll hang on to the bedpost
Then I drop my load, then get up and make some french toast
Run and get the paper and it won't be the Post
After that you know the flavor I'm ghost!

[Interlude: Pete Rock]
That's right, be out..
Hit it off.. on the skinz
C'mon, with the funky flavors
Uhh, gonna hit this off right quick

[Verse 3: C.L. Smooth]
Hit the skinz they're forever wins, cozy like my Timbs and brims
But never heard a bigger limb around the rim
Set to hurdle when I pop a girdle, sum it up surgical
Lay down the pubic and the stuff won't curdle
I got the remedy for competition of any
Sleepin' with the enemy who never got a pretty penny
Skinz I'm with, check the lower lipped pal of mine
Now you know the Pete Rock, skinz all the time

[Verse 4: Pete Rock]
Oh Pete Rock, raw as I ever been
Give me room so I can speak about the skinz
Take a tidbit, but God (damn it) can you dig it
Sisters play me close and they want my beeper digits
'Cause I love em undercover, the Chocolate Boy Wonder
Break like an earthquake, boomin' like thunder
'Til the honey dip the blouse, slip in the house
Sip the Stout, rip the boots, and I'm out

[Verse 5: C.L. Smooth]
Like the Isley's, apply these, in-Between the Sheets
Follow yes another trail as if I had on cleats
Rip my way through a negligee, park it like a valet
Sure it's OK, just met the skinz yesterday
Tap the baggy drawers, lay the laws, lovely puff it up
For the ride, honey buckle up, smearin' all your makeup
CL can wreck it well a bombshell finishin'
So get the tunnel vision on how I hit the skinz

[Outro: Pete Rock]
How I hit the skinz, uhh
It's fat, yes
As you know I like to flow
Don't try to show
Because I'm, the accurate man
Everybody knows it
Peace to all stealers
Of the Mount Vernon
Young poets and players
New Rochelle, the Bronx... 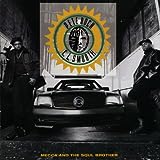