Slave to the power, a slave to the gold
Ruthlessly ruling the east
Your reign of terror come to an end
Fighting your unholy war

Chaos in east, disorder in west
Desert Storm is a go
Fighters are launched from the carriers at sea
Infantry coming your way

Feet after feet mile after mile
Allies returning the land
Hide underground as the coward you are
One day, we're coming for you 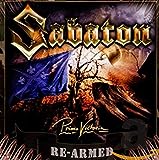