Nothing that has happened so far has been anything we could control
I have just been waiting for the perfect time to tell you I don't know
Maybe I'm just reading into it a little deeper than I should
We would make it easy, we would take it slowly if only we could

Hey, what are you doing out here?
You're thinking about everything, aren't you?
I know it's crazy, but just don't think of it like that
Nothing has to mean anything
Come on, come back inside

Elodie, look at me
Unless you're trying to hurt me
Heavy blow, down I go
Now I just want to let go

Is it right? Is it wrong?
I don't know
It's not the 'cause I'm fighting for
Anymore
But it sucks to keep on running

Eventually there will be
A time for clearer thinking
For now I weep, can't get to sleep
I try to hold a good feeling

I just get one, here it comes
There it goes
And we just might lose the fight, yeah
But it's alright
It wasn't our decision 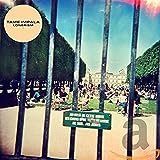