[Chorus:]
The ice age is coming, the sun is zooming in
Engines stop running and the wheat is growing thin
A nuclear error, but I have no fear
London is drowning-and I live by the river

London calling to the imitation zone
Forget it, brother, an' go it alone
London calling upon the zombies of death
Quit holding out-and draw another breath
London calling-and I don't wanna shout
But when we were talking-I saw you nodding out
London calling, see we ain't got no highs
Except for that one with the yellowy eyes

Now get this
London calling, yeah, I was there, too
An' you know what they said? Well, some of it was true!
London calling at the top of the dial
After all this, won't you give me a smile? 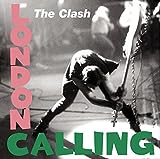