THE DECEMBERISTS
"My Mother Was A Chinese Trapeze Artist"

And I get letters sometimes, they bought a plantation
She weeds the tobacco, he offends the nation
And they write, "Don't be a stranger, y'hear?
Sincerely, your sister."

So my parents had me to the disgust of the prostitutes
On a bed in a brothel, surprisingly raised with tender care
Till the money got tight and they bet me away
To a blind brigadier in a game of high stakes canasta 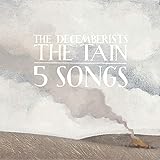 THE DECEMBERISTS videos - My Mother Was A Chinese Trapeze Artist