THE STROKES
"Life Is Simple In The Moonlight"
(The Strokes)

Got to get to climb your tree in the light of the living ghost I see
She sees her father in that old man's eyes while secretly he stares at her thighs
Animals on TV singing about some pain they felt at some point
I didn't wanna tell you I was jealous, jealous, jealous, what's the point? 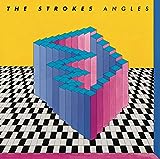 THE STROKES videos - Life Is Simple In The Moonlight