THE WALLFLOWERS
"First One In The Car"

We took 'em high, we took 'em straight up the hill,
They wanted it all, we gave 'em such a fill.
In their parades we stole every thrill
And in their games we made every kill.

We took them hard, we took them up against the wall.
In their loss we never let them fall
In their flames we sailed up to the moon
In their rains we slayed dry like a fire would.

So the bottom of my fears
Is that the girl might just disappear,
But that'll be the death of me,
The day she's just a memory

When we rolled, rolled on like a big drum,
We went to the top just above everyone,
They wanted to win, tie us up with a string, and steal everything.
We took 'em skin on skin, we laid 'em down in the ring.

So I swear, we're a pair,
Like loneliness and a prayer,
And you know I may still believe,
You may still need me.

And in their nights we made out with a loud scream,
And in their sleep we howled inside every dream,
So if you're trying to break me,
Come on why don't you shake me,
Right out of my tree,
The one that you made me, me

Well, she sang out of tune,
When she shot down the moon,
As I saw my all freeze,
Down onto my knees,
Where I was hit at the hip,
Between the cup and the lip,
As I was struck down under
With lightning and thunder,
As she cut all the strings
That I'd tied to her wings
Leaving me in the dark,
We stood just feet apart,
But she never seen me at all. 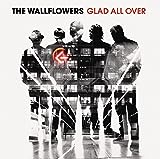 THE WALLFLOWERS videos - First One In The Car