Stands in line just a little behind
The yellow moon that hangs
He's all tangled and he broke his sticks on the links
Of his own chain gang.

You ought to see this home that he owns,
It's like a box of jewelry
He's got his own church bell
And his bed, it lays in a gallery.

And all the colors they shine like flames
Comin' in through the window pane,
(They) end up gettin' checked over twice
For the reds of someone's veins.

So cold and blown all apart,
So cold and needin' of a heart.
He stands alone on top of his home
Where all the bluebirds flown
Sucks in on his cheeks and he cries
As he moans through the saxophone

Reaches high with his hands in the sky
Puts his fingers right into the storm
Always one to stand under the moon
And blow on his own horn.

Yeah / Yet anyone with anything
Has already begun to think
That somebody down there knows
Just how he sat down on his knees in the dirt,
Buried someone's rainbow.

Well I know you ain't my enemy
The only one's inside of me
He's killin' me getting free
I hear he wants my head with an old ice pick
And fix me up on a stick.

And all I've ever gotta be
Is anything I wanna be
(Well) Sugarfoot disagrees
He still stands tall underneath that apple tree,
Man, he's still watchin' me.

His chain-gang is tryin'a pull me down
Just like the birds and the fireflies
They shoot arrows up into the sky
And they burn all the feathers dry.

He only wants to fill his belly up
With rocks 'till it hurts, then he stops
He don't know what to do with love
If it don't fill his belly to the top. 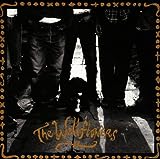