My little baby brother used to play down on the floor,
But now he's not satisfied to do it anymore.
He's got a funny habit and I don't know why,
He walks around the ceiling now, stepping on the flies.

Well, just the other day, well-a bless-a my soul,
I found him swimming round in the goldfish bowl.
Since nobody told him that he hadn't oughta,
He swam around for hours with his head underwater.

Well, my little baby brother, he's a cute little cuss,
But it's plain to see that he's not one of us.
Where'd we get him? I know you're gonna ask it.
We found him on the porch in a crazy little basket.

Well, I bought my baby brother a toy balloon,
He let it get away and it floated toward the moon.
Instead of crying, he climbed up on the fence,
Started flapping his arms and we ain't seen him since. 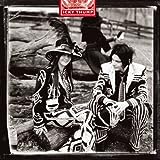