montclaire de havelin doin' the st. vitus dance, lookin' for someone to chop
the lumber in his pants, how am i gonna unload all of this ice and all this
mink, all the traffic in the street but it's so hard to think, goin' downtown
down downtown.

frankie's wearin' lipstick pierre cardin, i swear to god i seen him holdin'
hands with jimmy bond, sally's high on crank and hungry for some sweets, she's
fem in the sheets but she's butch in the streets, goin' downtown down
downtown.

it's the cool of the evening the sun's goin' down, i want to hold you in my
arms i want to push you around, i want to break your bottle and spill out all
your charms, come on baby we'll set off all the burglar alarms, goin' downtown
down downtown.

red pants and the sugarman in the temple, drinkin' chivas regal in a four
dollar room, just another dead soldier in a powder blue night, red pants turns
to sugarman and says everything's alright, goin' downtown down downtown. 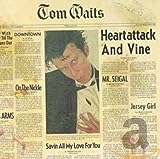