VAN DER GRAAF GENERATOR
"The Emperor On His War-Room I. The Emperor"

Standing in the space that holds the silent lace
of night away from you
You think that you can hold the searing, molten gold
between your fingers ...
But it slips through, tearing tendons as it goes,
exposing the white of a knuckle ...
flesh-and-metal forming letters in the mould.

Cradling your gun, after choosing the ones
you think should die -
Lying on the hill ... crawling over the windowsill
into your living-room
They stare out, glass-eyed aimless heads,
bodies torn by vultures ..
you are the man whose hands are rank with
the smell of death.
Saviour of the Fallen, Protector of the Weak,
Friend of the Tall Ones, Keeper of the Peace ...
Ah, but it is the only way you know .....

Looking out to sea, a flattened plane of weeds which bear no living
You crush life in your fist as your heart is kissed by the lips of death
Ghosts betray you, ghosts betray you,
in the night they steal your eye
from its socket ...
and the ball hangs fallen on your cheek.
Complaining tongues are stilled; a thousand mouths
are filled with rusting metal.
Your face a shade of green; somehow you try
to speak through all the garbage in your mouth
But it won't come out, and you cannot frame the words
as your stepson
throws your fame into the flames and you are burned.
Saviour of the Fallen, Protector of the Weak,
Friend of the Tall Ones, Keeper of the Peace.
Ah, but it is the only way you know .......... 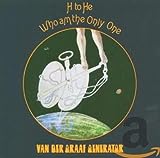 VAN DER GRAAF GENERATOR videos - The Emperor On His War-Room I. The Emperor