Another bride, another June
Another sunny honeymoon
Another season, another reason
To make whoopee

A lot of shoes, a lot of rice
The groom is nervous, uh, he answers twice
It's really killin', the boy's so willin'
To make whoopee, whoopee

Picture a little love nest, yeah
Down where the roses cling
Picture that same sweet love nest
See what a year can bring

I tell you the boy's washin' dishes an', baby clothes
He's so ambitious, ooh, I tell you he sews
It's really killin', the boy's so willin'
To make whoopee, whoopee

You see, I don't make much money
Only five, uh, uh, thousand per
And some judge who thinks he's funny
Tells me I've got to pay six to her

I said now judge, suppose I fail?
The judge says, "Ray, son, son, right on into jail
Ah, you better keep her, I think it's cheaper"
You know what I've been doin', don't you? 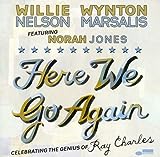