*Most people avoid discussing racial differences
Though differences exist, it's not only bad taste dimensional
It places one in the awkward stands of being labeled as a racist*

[Verse 1: Uno the Prophet]
These touchy subject, man, I specialise
Realise, I analyse, then I criticise
Beat biter, dope style taker, you're the
Killer of culture, motherfucking vulture
You stole the soul, jazz, rock 'n roll
Those who can't control, put 'em on the payroll
Or on the whole stroll, so when they gon' go
They won't act so bold, but that story is so old
Nat Turner, devil burner, won't conform to 'em no mo'
So and so-so, but ban my shit 'cause some ho told
I got facts for your emotions, I got truth for your lies
I got words for the wise to open up your third eyes
And the fact is, the main thing that hip hop lacks is
A general consensus to the original lace of blackness
And anything else is wackness, pussy all talk slackness
I'm a child of destiny, say my name if you jack this

[Verse 2: Esoteric]
Listen dog, I got respect for that
But take a second to check where my perspective's at
I came up in '85, I'm almost 30
Never brake under pressure, my bones are sturdy
There, you've got to face the facts
You know we've got white boy spitting blazing raps
Soul words coming out them of the Asian cats
Bigger tracks on the road that's paved by Latino's and blacks
New jacks be concerned, this shit's hard to earn
Before you get a turn to burn, you must learn
I'm just speaking my brain, ain't trying to steal rap
And start teaching the pain
Mc's like myself ain't preaching for fame
In a minute roll a style that will cheapen the name
Please entertain for a fleece and a chain
Bring the least and no reigns
But are we different? The rap industry is the same
Look, I symphatize with your reason for blame
Most white cats flowing is a seasonal thing
But I spit facts, back rebels, won't sell out, won't settle
How could you possibly call me a devil?
In '86 I was writing rhymes, reciting lines from my favorites
(Like who?) Like BDP, Kool G Rap, EPMD and RUN DMC
Local cats like Orange Man, I endorsed the man
I supported like fam, the essence, I'm trying to bring it back
I ain't the cat that you want to point the finger at

[Verse 3: Uno the Prophet]
Who raped and who killed? Who destroy and who build?
Who fulfilled the prophecy? Who made this thing a mockery?
You ain't jotting properly, cracker rocking sloppily
Ain't no stopping me, hip hop to me is black people property
You're like boy band and pop to me, there ain't no equal
[?], from Shaka Zan all the way to Jigga
I say cracker for every time I hear nigga
Original boom-bapper, cracker backpacker smacker
My shit be sweeter 'cause the motherfucking berry blacker
Don't come with eluded concepts or material ideas
My shit be concrete, repped the streets for years
My shit be complete, on a level with no peers
And I ain't going living myself and moving according to your fears
Me, I switch gears, let humid ears hear
All these cats who be acting come nowhere near here
Take a look at the crook and all the shit that they took
Already got a gun, son, get yourself a book
Touchy subjects that I touch, people say it's too much
But I ain't got no master, see, I'm faster, smoke a Dutch 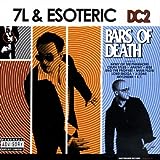