DARK FUNERAL
"When Our Vengeance Is Done"

[Intro:]
Servants of God and the cross and the lamb
A gathering of fools
One by one they will crawl through the mud
To bow their heads to the Beast

They gather in flocks and they pray on guilt and innocence
While they are hiding their lies
In temples and convents they're lurking, oh so prominent
They reach beyond every aspect of life till they die

We shall invoke the ancient, raging evil
Come let us feast upon the priest and drink their holy blood
We will reclaim the throne and banish all the filthy scum
And cut the tongues out from their mouths, and see the life escape their eyes

They gather like crows when they think they've found the weakest ones
While they are masking the truth
They hide behind virtue and guilt while making promises
If you see right through their veil, they hide a hive full of worms

[Bridge:]
They think they are wolves but they fear what's hiding deep inside
For we can see through their lies, and it is time to wage war

We're calling forth the end, the Antichrist
And let us feast like hungry beasts and share it with the dogs
We will inflict the wounds that rids the world of their decay
And push the spears right through their hearts to see their eyes devoid of light

They're screaming like pigs as we strike the match to burn them down
While they are joining their hands
They hide behind shame and regret, but we'll show them none
And when our vengeance is done, they will forever be gone 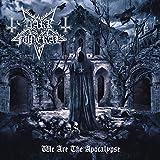 DARK FUNERAL videos - When Our Vengeance Is Done

Home > D > DARK FUNERAL > When Our Vengeance Is Done lyrics