FZ: "Hello there, welcome to the show. No, we are not going
to play 'Cheepnis'- that's right-but we are collecting underpants,
and we are collecting brassieres, we are collecting small articles
of feminine underclothing. We are making a quilt... really-trust me.
So here's the deal, if you're a girl and you're wearing a dress,
whip'em off, that's it, see? No problem. Even with a pin... what
does it say? 'Nobody's perfect.' I guess so... What we got here?
Oh. Now let's see what's on the inside. Uh huh, trainer coos.
Okay. S'more s'more ... Underpants, brassieres, just send 'em up,
no problem. Oh, you'll warm up to it. If you're wearing pants and
you have bikinis on underneath your pants, rip the edges and
pull 'em out; if you're wearing those big old ugly cotton jobs go to
the toilet and take 'em off, okay? So far, ladies and gentlemen,
the response from this particular community has not been especially
gratifying. Perhaps you're a little bit too intellectual here. Here's
something ... tasteful, very tasteful... You'll get into it. Oh, some
more-look-it's almost like going to a, well, never mind. Heh, heh, heh.
I just want to remind you that you are in direct competition with Chicago,
which so far has produced the highest yield of female underclothes
of any place in the United States. Oh, here's one, thank you very much.
Chicago, if you'll recall, was the town in which we received the very
famous Voodoo Butter Underpants... heh heh ... the pants that nearly
broke Tommy Mars' neck. As soon as he took a whiff of those, his head
went back this far, and he was heard to mutter 'Jeezus.' So, we don't
care what kind of condition they're in. What've we got there? 'Twat
Book,'okay. Uh huh, very good-Zeets, whadduya think? He already
has that one ... no problem, though. Well, tonight you're gonna be
entertained by; Ike Willis on guitar and vocals; Tommy Mars on
keyboards and 'Jeezus. 'You're also going to be entertaining " yourselves
a little bit, but don't worry about it. Steve Vai on guitar, vocals, and light
blue hair." IKE: "Another contestant over there." FZ: "Oh. some more?
Okay. Vinnie Colaiuta on booklet. Now what does this say? 'My hat from
the ... how about wearing my hat... wearing... How about this, this is
a college community right? 'How about wearing, w-e-r-e-i-n-g never mind.
Arthur Barrow on bass; Bob Harris on keyboards, high vocal trumpet and
vegetables; and, ladies and gentlemen, the world famous Ray White on
guitar and vocals. Okay, you ready? One, two, three, four..." 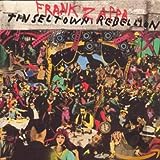