Wolves by the road and a bike wheel spinning on a pawn shop wall
She'll wring out her colored hair like a butterfly beaten in a summer rainfall
And then roll on the kitchen floor of some fucker with a pocketful of foreign change
The song of the shepherd's dog
A ditch in the dark in the ear of the lamb, who's gonna try to run away?
Whoever got that brave? 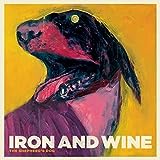