THE FLYING BURRITO BROTHERS
"Down In The Churchyard"
(Hillman-Parsons)

There's a man, a tall man, follows no one
Out in the storm, can he stay warm, all the things that he's done.

Oh the city lights are such pretty lights
Get a move on, tell him it's alright
Sing a song and say that it's alright, say it's alright.

There is a man, a crippled man, is he a soldier?
Can his new wife live out her life the way he told her?

Where you have been is not a sin, it's where you're goin'
Hurt anyone by what you've done and it starts showin'.

Oh but you can't complain about the wind and the rain
You're gonna gather in the churchyard just the same
Your water won't ever wash away the stainy, if you remain. 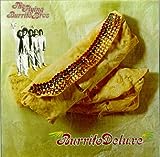 THE FLYING BURRITO BROTHERS videos - Down In The Churchyard