[Intro: DJ Drama & Tyler, The Creator]
Destination: remote
We done been everywhere
Only thing we ain't traveled
Is time (Yo)

[Verse 1: Tyler, The Creator]
The boy record smell like bleach
I can travel where I want
I'm accustomed clearin' customs
It ain't custom, I don't come
Flee the bird to the truck
I scream, "Au revoir," to the stewardess
Border control asking stupid shit
Stayin' at home, I hate
Runaway love, but I'm no Ludacris
Sippin' on mint tea, take my shoes off
Then we take off, then I snooze off
Until I land where I'm foreign
Then I wake up, wipe the drool off
Got my passport in my weekend
I'ma cool off, get a sweet tan
Loafers filled with beach sand
Recline 'til it's time to peace sign
Fuck all the chains and the cars, get a passport
See the world, open your eyes 'til your back hurt
Niggas get bread and won't leave, shit is backwards
Start with your feet, then a car, then an airport
Get out your bubble gum
Blow up horizons, sun
Sled in the Alps or go tube in Missoula
Or tour in Japan or go scuba in Cuba
Or land in a borough, Jerrod got the brioche
Ciabatta in Como, it matches my peacoat
Oversee the sea, all the things that you could see
Like them languages I speak, out in Paris for a week
Take my nephews out to Nice, they like "Who?" I'm like, "Oui," ha

[Verse 2: Tyler, The Creator]
Every car retarded, the garage look like a loony bin
What coupe he in? Depends on the 'fit and the type of mood he in (Ugh)
I been switchin' gears since Tracee Ellis Ross was UPN
Clutch, then he stroke outta nowhere like a droopy grin (Ugh)
Huh, took that Grammy home, couldn't lose again
The suit was so sharp that it could get Medusa coochie trimmed (Ugh)
Hov talkin' 'bout a hundred million, nigga, loop me in
Like who that young, rich, handsome nigga with the gooey skin? (Ugh)
Mama named him Tyler and his brothers call him T
And the bank, they call him when that wire clear like season three or somethin' (Ugh)
Skateboard named him Bunnyhop, it's Baudelaire or Wolfie, though
The felines named him hour for how long he eat the- (Pussy) wait a minute (Ugh)
Pink loafers scuff quickly, Fiat cost a buck sixty
I'll keep it a buck fifty, y'all can't really fuck with me (Ugh)
Bitch, I got the fuzz and I'ma own it 'til they bury him
Only twenty-nine, but I've been focused since thirty M (Ugh)

[Outro: DJ Drama & Tyler, The Creator]
Wolf
Call me if you get lost (Gangsta Grillz)
And like that (Uh), we gone 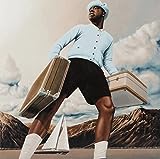