[Verse One: Jeru the Damaja]
Last year record companies were chumpin me
But now like chicks they all be up on me
And me so horny, I hit 'em like a groupie
Snatch off my hat wash my dick and keep it movin
Showing and proving on a day to day basis
I rip New York and a million different places
State to state country to country
My skills are legend in the style of poetry
I've paid my dues to this game word to mother
Peace New York hops it gets no rougher
Baby brother been puffing buddha and blunts since eighty-five
Before the fake motherfuckers started perpetrating live, I've
Achieved mad props though niggaz roll around in jeeps
I ride the A-Train and get mad beeps
So when we bang bang boogie out jumps my boot knocks
Chicks comes in flocks when D.R.S. rocks glocks
And I mean it it's all done with the mind
I neutralize suckers because I'm alkaline
I could go on for days speaking bout my clout
So Lil Dap snatch the mic and show the motherfucker out

[Verse Two: Lil Dap]
Yo you can't hide from jail and you can't hide from the street
Flavors do get deep when you're walking the east
A unit down from the underground made the brothers unite
I'm slappin pounds and pounds with real niggaz aight
Ain't nothing changed but the weather, rain storms or whatever
You poured a forty on the ground for the brothers who ain't around
Break it down with the flow as I walk through the ghetto
A nigga said he couldn't do it till the shit hits the fan
Last year I was The Man ripping up every jam
So what's your hobby nothing serious when things get rough
I'm stepping rugged and tough, and bitches won't get enough
A Lil Dap what's that? Fuck around you get slapped
Schizophrenic with rhyme plus we're well organized
Make the chicks say 'aow' and the brothers say 'ho'
You can't tell a motherfucker what to do with his life
Niggaz tend to live trife, so I react with the mic
It's the end of the time so I got to gets mine
Aiyyo 'ru, what's your function meet me at Broadway junction
Before I start to get in it, better yet I just kick it
Aiyyo son, if you're ready Guru starts to flip it

[Verse Three: Guru]
Earl, with my three-eight-five shot I bust a bumba claat
He talks dumb a lot so him shall drop
I got the clout, all you pussy rappers be out
From the ghetto I let go, shit to make you petrol
Watching fly niggaz show you how to rhyme asshole
You know the motherfucking situation
So get down get down with the Gangstarr Foundation
Now I'ma touch on reality, chumps can't fuck with me
And all the honies be loving me
My style be kicking crazy butt
Wannabes on their knees licking crazy butt
Your girl pays me but ain't no need to try and stop her
I'm Big Poppa steal your girl and I'll drop her
'Cause she be working on my nerves
And yo I got more gang than the bitch got curves
I'm like gambino, the slick head honcho
Ill kid ready to wreck mics pronto
And I know, I break your back with my rap like smack
Because I'm all that
And so the next time when you're wishing for my downfall
I'm a come back to drown y'all
With stupid lyrics relative to a bloodbath
And stay the fuck out my path... 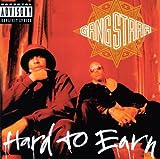