There are a lot of comments about who's blacker than you are, and who's blacker than she is, blacker than thou
In other words, it's a sort of trend
And, in looking on various street corners in Harlem, I'm sure you seen it yourself
Standing on a soapbox on the corner, is an alleged brother
Dressed in blue and black dashikis or green, red and black dashikis
And spouting the news that the revolution is coming and you'd better get ready
Sorta-like the end of the world is coming
I saw recent commercials that said:
"Unfortunately, the world is just going to drag on and on"
And we have a poem that we've written particularly for the brothers on the street corners
And it's called just that, "Brother"

We deal in too many externals, brother.
Always afros, handshakes, and dashikis.

Never can a man build a working structure for black capitalism.
Always does the man read Mao or Fanon.

I think I know you would-be black revolutionaries too well.
Standing on a box on a corner, talking about blowing the white boy away.
That's not where it's at, yet, brother.

Calling this man an Uncle Tom,
And telling this woman to get an afro,
But you won't speak to her if she looks like hell, will you, brother?

Some of us been checking you act out kinda close.
And by now it's looking kinda shaky, the way you been rushing people with your super-black bag.
Jumping down on some black men with both feet because they are after their B.A.
But you're never around when your B.A. is in danger.
I mean your black ass.

I think it was a little too easy for you to forget that you were a negro before Malcolm.
You drove your white girl through the village every Friday night,
While the grass roots stared in envy and drank wine.
Do you remember?

You need get your memory banks organized, brother.
Show that man you call an Uncle Tom just where he is wrong.
Show that woman that you are a sincere black man.

All we need to do is see you shut up and be black.
Help that woman.
Help that man.
That's what brothers are for, brother. 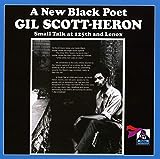