[Verse 1: Slaine]
It's the return of the assassin
I believe in the Creed of the Greedier
Bash in your skull with guns, I'm deceiving the media
Look at the web of lies that I keep weaving, immediate
Breathing the weed, speeding, and I ain't hitting medians either
Fuck the Bible, I'm writing my lyrics and read em to Jesus
Fight with spirits and sleep in a bed with the rifle near it
I used to smoke angel dust back as a teen
Copped the bundles in Harlem and sell packs of the beans
Rolling in stolen cars leaving accident scenes
Crazy Eddie envelope stacked in the back of my jeans
When you hear me rhyming, wonder what has happened to me?
I had a wet brain, but I came back spectacularly
I got a third rail on the train tracks will zap me
That's why I'm just the way I am, this is actually me
I said the return of the assassin, the assassin is me
Wipe my ass with hundred dollar bills and laugh at a G

[Hook:]
My greed gets me everything
The means to fulfill any dream
Sparked by the endless greed
As we struggle in this world full of lust and greed

[Verse 2: ILL Bill]
It's the return of the Cult Leader
I believe in the Creed of the Greedier
Final Destination like a plane careening and speeding
Like a demon in my bloodstream, bleeding anemia
Better yet I'm even worse than that, speaking leukemia
Premium goods like overpriced diamonds that cut glass
Coca without the Cola and the white mustache
The brand you can trust
We high-powered and coked up
Hole in the head looking like a powdered donut
Or like Sho 'Nuff from the last track and cash stacking up
Pull out the black Magnum, now your ass is backing up
I've been the poster child for coka piled higher than the heavens
Occupy the streets, rioting with peasants
Drinking cocktails and partying with rock stars
Throwing Molotov cocktails at cop cars
I said it's the return of the Cult Leader, La Coka Nostra's the crew
Point the finger over here, we pointing toasters at you

[Verse 3: Danny Boy]
It's the return of Danny Boy
La Coka Nostra build and destroy all
Lock it down like a dog's jaw in a dog brawl
We get it on y'all, set it on you
Roll the red carpet over your head and shred it on you
We men of honor, amongst the cold-blooded anacondas
With invisible barcodes and transponders
I see the chemtrails, acknowledge everything homie
But don't trip though, 'cause God is everything homie
I came a long way from airports and highways
I took the wrong way but yo, I did it my way
I took you from the House of Pain to the House of Slaine
Down the road to Hell but made it back without going insane
Thinking one step ahead of these lames
Same supergroup, homie, we the best in the game
It's the return of Danny Boy and La Coka Nostra
Creed of the Greedier, but I already told ya

[Outro: Phil Donahue]
When you see the greed and the concentration of power...
Did you ever have a moment of doubt about capitalism?
And whether greed's a good idea to run on? 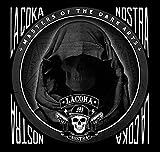