[U-God]
Time to knock 'em out, cut 'em with the glass hand
Time to shut 'em down, I'm coming out the badland
Oscar the Grouch, kid, jumping out the trashcan
The last man that violated, got chopped with the sword
Send him a one way express ticket to see the Lord
You think we falling off, the beef's internal
All that bullshit we going through, it don't concern you
I'll thermonuclear burn you, you'se a human sacrifice
'Cuz I be smashing mics with the Passion of Christ
Stay fully loaded, equipped with action devices
Kid, stashing these stripes, join the force
Honey, take ya flick, lift and point to the boss, soon
As you blink, your coins is tossed
It only takes four bars to get my point accross
And I'm cold as winter frost, on top of the mountains
Elijah, was the prophet, along came Malcolm
And I'm scalping niggas, taking devil's heads
Money generated, niggas taking heavy bread

[RZA]
I was born in a barrel of razor blades
Right next door to haze, I used to be afraid
Of the devil, as a boy, but now as a grown man
I realized, he is just a toy
A grafted image, of the magnificent splendid
Dominant, prominent, Islamic
I was here before the dinosaurs, shine and defining law
Measure every inch of the Earth, combining more
Elements and chemicals, phosphates and minerals
Kept devils on the run, like Monk-Monk the General
Appear in a king attire, slept in a ring of fire
I, got a bigger beat than Billy Squier
Dirty Dick Dastard' dart, straight out the dungeon
Transform on niggas like the werewolf from London
Paul Bunyan ax tracks, get peeled, caps back
Hard to get out, nigga, head like naps
Parental advisory, no M.C. is wisin' me
Me and the mic, like, ebony and ivory
We go together, like, cheese and cheddar, like
Jeans and sweater, like, Mo' and better, like
Who could take a sun ray, twist it to a rainbow
Darts sit upon your head like the Kangol
V is for Victory, I mastered your trickery
Tryna clock like dickory, get smoked like hickory
So please stop the bickery, you can't get rid of me
Wu Killa Bee, from now to infinity

[Method Man]
Look at this bitch ass, snitch ass, about to get a kicked ass
Get mad, get smashed, and get another zip bag of 'dro
For these ho niggas, slow niggas, told niggas
Fucking with the coal miner's daughter, she a gold digger
Killa, I'm back iller, been realer, chinchilla
Coat, ex-crack dealer, cap peeler, dope
Uncut coke, cut throat, niggas had enough dough
What up, though? My nigga, I don't trust no bitches
That's real shit, feel this, vanilla Dutch is still lit
Forensics is still tryna figure how I killed it
Wu-Tang, my crew bang, let our nuts hang
Like that piece on a new chain, mami, pop the poontang
Your party, find me where the stars be, or probably
Walk into the corner store on Targhee
Smokin' Bob Marley's, I'm hardly, a nigga to be fucked with
And you tryna 'catch up, but you barely cut the mustard, aight then

[Masta Killa]
Just another spine chiller, U-G, RZA
M-A-S-T, A-K-Illa, M-E-T-H, O-D gorilla, straight from the Killa
Brownsvillah, do or die Bed-Stuy
Murderer, East terrorist, we clap gun thunderist
Land of the Iron Gods, swords can't live
Medina stay warrior, how can I escape the block
From being boxed off, lost in the shuffle of life
Living right cost, legendary crime boss
Fresh kicks drip in the street, beautiful unique
Freestyle, be so wild, fresh out the Penal
Track it on the Pro Tools file, smooth as blue nile
Wave spin, water blend, dart flow, sun glow
Kool Moe Dee roll, gang up on a power show
Snoop never love a ho, bang it on in your vehicle slow
You don't know how the God be flipping the style
And keep it so, Witty Unpredictable
Truth All Natural, the Gods is actual
It's a fact, I was destined, to grab the mic and bless them 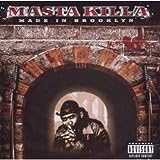