METAL CHURCH
"Noises In The Wall"

Like a creeping shadow moving through the room
No one else can see it, I sense impending doom
Plugged into my mind somehow, it haunts me all day long
Like a strange religion, the children marching on

I hear the voices, they're calling me back
Oh God what could I have done
Something's left over, I hear the call
Forever I'm living with noises in the wall

When I played with fire I never felt the burn
Now I feel it everywhere, the devil takes his turn
The darkness held the promises, hiding from the dawn
Like a strange religion, a children's marching song

I hear the voices they're calling to me
What do they want with me
Somethings left over, I hear the call
Forever I'm living with noises in the wall

Playing games with the enemy, brings to life your darkest dreams
When you know what it really means
It's now too late
The creatures of the night you'll find, soon to become shadowblind
You won't even realize
You've started to die

A fools game with no winner, a soul of black forever
First he'll be an angel of light
It starts gnawing at you, always never leaves you
Now that you have opened the door

And they know what you fear, it's what's drawing them near
Another tormented soul to steal

Something's left over, I hear the call
Forever you'll be living with noises in the wall 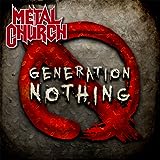