You want me to relax on a plane
Man, that's practically insane
Every time I fly up convinced we're goin' down in flames
See, I passed the security and dealt with all the rubbish
And taking my belt and kicks off and paying 80 bucks for luggage
I got my carry on, I'm ready to fly
Like a bird, get my larry on, I'm steppin' inside
People always in the way they gotta move to the left
There's the Captain with the booze in his breath
I greet the stewardess next
Who's kinda hot but she isn't my style
Just my luck I have a seat between a window and ow
Stuck between 2 people I'm a prisoner now
Hear behind there this ritalin child, shit is wildin'
The woman next to me is Betty Perfume, heavy southern accent, mixed?race?
The dude on my left, death breath I suppose
A redneck named Ed if I'm judging by his clothes and yo
You think I like that, cuz I don't pay attention to the flight attendant when she demonstrate the life west
Or the oxygen mask, cuz if we're gonna crash
We all dyin' and that's why I hate flyin'

I guess we're getting in a midnight show [?]
A 9 hour flight with 1 in-flight movie
It's some chick flick, Sisterhood of traveling pants shit
I can't sit still, can't go to bed, can't grab my headphones
They're in the overhead, unless I climb over Ed
Yo I think I'll wait for a soda instead
Yeah I'll have a Pepsi, the whole can, not a cup of ice
Man I'm feeling like I suck at life
And when the turbulence kicks in, my nervous system
Makes every little sound sound sickening
Sometimes I feel planes are the worst invention
Birds and engines don't mix, shit mechanics don't fix
Betty's sleepin' and I'm frozen like a mannequin
I take a look around the cabin and nobody's panickin'
That's good but weather was safe, can usually be told by the look on the flight attendants face
That's when I hear a crazy sound as she hits the ground
The redneck looks at me and says: "I think we're goin' down"
And now there's women screamin', babies cryin'
I'm afraid of dyin' I hate flyin'

I think Ed is right, shit, we're goin' down
I hope the landing gear is intact
I prepare for impact
I feel my limbs crack, put my head to my knees
Got my ears covered up, what the fuck is goin' on
I'm holdin' on
We're supposed to sail right across
Not go out like the Oceanic flight from Lost
Yeah we dive through clouds
Beads of sweat dive through my eyebrows
I'm thinkin': "Why now?"
My whole body tenses up, fist clenches up
Hell or Heaven, tell me where will I be endin' up?
My seats buckled, head's buried, eyes shut
The Captain comes on but everyone's like: "What?"
'Cuz you can't understand, never can
And I think we passed the point of looking for a place to land
This is certain death, I won't even need a coffin
I won't bleed a drop and
Somebody better tell St. Peter I'll be knockin'
Can't believe this is it, the only option
We gonna blow up, incinerate, and no one's watchin'
Altitude droppin'
There's no stoppin' this plane
My ears poppin', its insane
My fear I can't conceal it, sad I won't feel it
I'm thinkin' of my life, my son, my dog, my wife
No no no,?nobody's talkin'? this is it, I'm gonna dieeeee!
Welcome to Boston

I bet they lost my fuckin' bags tho 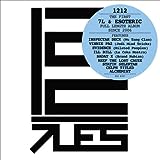