Well I come from West Virginia and the day that I was born
Hit the ground running like a wind and I was gone
I was faster than a rabbit and I left the deer behind
And the mountains couldn't hold me so I headed down the line
Got to California, joined up with Uncle Sam
Said "I've come to halt the Nazis, I'm a mighty mighty man"
They couldn't hold me down so they taught me how to fly
Then they shipped me 'cross the ocean, now I'm the fastest man alive

My name's Charles Elwood Yeager, everybody called me Chuck
I'm a bone stick and rudder mother brother sure enough
I was all that they could handle till they shot me down in France
Then I swam across the Channel just to get another chance
When the war was over, pinned a medal on my chest
Then sent me to an airfield in the desert way out west
Said "Someone got an airplane everybody's scared to fly"
Said "Bubba let me at her, I'm the fastest man alive"

Well she looked like she was flying 'fore she ever left the ground
So we strapped her to a bomber and we took a spin around
Said "Boys I'll call her Glynis, she's the one I love the best
What you say we put her aerodynamics to the test?"
We were high above the desert when we let the sucker drop
When we lit that Roman candle boy you should've heard her pop
It shook the mighty mountains when we crossed that sonic line
Seven hundred miles an hour, I'm the fastest man alive

I'm a lover, I'm a fighter, I'm a sinner, I'm a saint
I'm a mover, I'm a shaker, ask your mother if I ain't
I'm the rumble in the thunder, I'm the bolt out of the blue
I'm the master of the stratosphere, a pilot tried and true
My name's Charles Elwood Yeager and I've been everywhere
Paris, London, Timbuktu, and Dover, Delaware
Ended up in California, that is where I'm gonna die
I come from West Virginia, I'm the fastest man alive 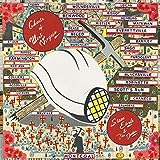