[Cappadonna]
I was born in New York City, September 18th
In a Jewish hospital in Brooklyn, my body was clean
I was known as a bastard child, and my pop left early
Muthafucka, I ain't know his style
I was raised by my step-dad, that's my father
A good married man, plus kept a revolver
Taught me not to hit ladies out, I don't really need 'em
Never trust 'em hoes, know how to read them
And my step-father split, I was out on my own
I was only 17, but I thought I was grown
I sold crack before I got my hands on the chrome
At the same time, I had chicks giving me dome
My girl claiming she virgin, not wanting to bone
I did a one-to-three for cracks, and I came back home
Seeded my girl up, but I was still on the roam
I was out in Body Brighton, straight marking holmes
Me and my nigga RSC, that's my doolah debt brother
We held each other down, watch out for undercovers
Eight months later, got knocked again
Praying the lord lift me up, I got dropped again
Cops took my crack money, stopped again
Then they put me in the cell, and they locked me in
My good girl turned savage, and she whopped my friend
I did the bid, came down on work release
Cut my girlfriend off, start working the streets
Hustlin', doing whatever so my seed could eat
My girl didn't get along, we always had beef
Me and my seed relationship started to get weak
Rapping at the same time, started to get deep
My life got crazier, then I out stand it
A year and a half later, my crib is surrounded
I slipped off lovely, now I'm up in the Bronx
One the Grand Concourse, that's up in New York
Police scaring my mother, and they was calling the fort
Harassing my peoples, cuz they want me in court
So I turned myself in, they staight sent me to Sing-Sing
I ain't new to this shit, though, I be doing my thing-thing
So I did my violation, kid, nine in the mohawk
Where niggas cut niggas and them dogs show off
I bugged out for a minute, they put me in the box
Kid, I did my time in jail, I carried my ox
Never fronting where I come from, I carried my block
Now I'm back on the set, and my darts is hot
Same time my Wu-Tang niggas started to pop
I was battling these MC's, way before that joint called Ice Cream
Land, and you couldn't understand, how I claim my spot
Razor Sharp Records signed me up, straight off cop
I was shooting videos now and mixing the drinks
Me and my dogs Rae & Ghost dropped a joint called Cuban Linx
Mad groupie love, minage's and minks
On the down low, my rep started to get bigger
Everybody that didn't know me was like "whose that nigga?"
Next thing you know, here comes The Pillage
Hit you in the head, ramsack ya village
Way before you rappers, turned into killers
The Five Percent Nation had the game on Knowledge of Self
To showin' all of ya niggas how to get the dollars for delf
A lot of ya'll smart niggas went to college for health
But I'm ghetto all of my life, my cards were dealt
Might slump you over my paper, fuck the belt
I'mma keep spittin' my darts, til my words are felt
Poppy Wardrobe King, ya'll ain't know how to dress
I told ya'll in Winter Warz, I was Staten Island's best
Never told you the story though, I was taking a rest
How I started blowing up, niggas getting upset
Yo, I'm known as Original, in my projects
I'm known as Cappadonna, in my projects
And I'm try'nna write something, my readers could digest
The Yin & Yang came different, I began to fall
Problems with my click, it's no longer all for all
Me and my Baltimore niggas, ready to brawl
So we slipped up in the gate, like Taj Mahal
The Clan was on the stage, they was holding the ball
Then Ghost gave me the mic, my verse got avoided
Me, Dust Dap' and Ed, was paranoided
The money might of made it, but the money destroyed it
The rumors circled how the Clan, they dissed Summer Jam
Rose up against the system, we all got banned
Some of the lost generation don't know who I am
I'm on that Theodore shit, like I told you I can
From crack sales to grams, the guns, the fams
Weeds, the ecst' pills, plus crushin' the fans
I see where them idiots be tuckin' they hands
That's why I'm always on the grind, never ducking my plans 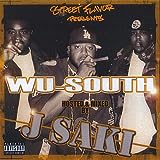